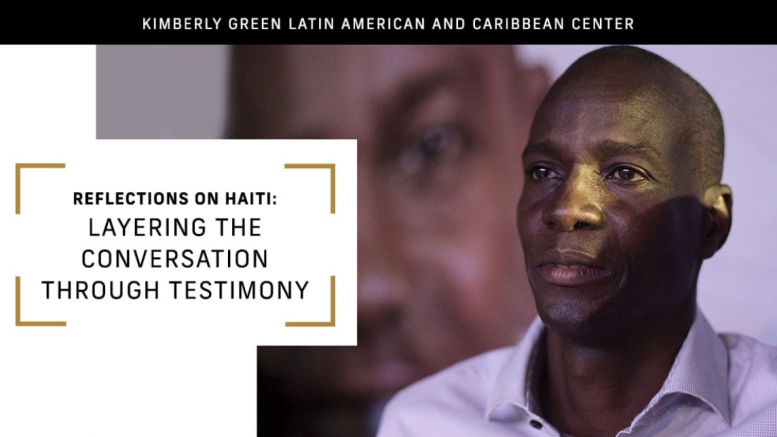 Haitian President Jovenel Moïse was assassinated in his home this past Wednesday, July 7, plunging the country into greater political instability.

The assailants gained access to Moïse’s home by posing as US Drug Enforcement Agency officials, identities which have been confirmed false by a senior Biden administration official. First Lady Martine Moïse was also injured in the attack and has since been moved to Miami for medical attention.

As of Thursday, the two Haitian-Americans, Joseph Vincent and James Solages, had been arrested. 15 Colombians were also detained.

FIU’s Kimberly Green Latin American and Carribean Center (LACC) held a panel on Friday entitled “Reflections on Haiti: Layering the Conversation Through Testimony.” The event was moderated by Chantalle Verna, an associate professor of history and international relations and LACC affiliated faculty, and included panelists who worked in education and journalism.

The panelists attributed Haiti’s current political crisis to factors such as failing institutions and deep-seated government corruption, which have resulted in widespread violence.

All three panelists disagreed with the Haitian government’s claims that their domestic situation was under control following the assassination. Haitian officials have requested U.S. support to stabilize the country.

Constantin Chèry, an independent journalist and assistant principal in Miami Dade County Public Schools, stated that Moïse’s assassination has raised many questions, such as how the mercenaries entered Haiti and how they obtained their weapons.

“All those weapons they are showing, if those weapons are there in Haiti, how did they get there? Haiti can make many things, but they cannot make those sophisticated weapons. They don’t have them there,” Chèry said.

The nature of the weapons that the assassins were carrying has produced concerns over whether the assassination was organized by hostile foreign actors or domestic actors opposed to the Moïse regime.

Furthermore, it has revealed a power vacuum in the country, as there is no clear line of succession. Claude Joseph, the former prime minister who recently stepped down, has now taken over as acting prime minister, placing the country under martial law.

However, last week Moïse appointed Ariel Henry, a Haitian politician and neurosurgeon, as prime minister. Though Henry had not yet been sworn in, he claims he should step in instead of Joseph.

Haiti has been facing political unrest since earlier this year, when citizens took to the street demanding Moïse step down. Moïse had failed to organize legislative elections after the Hatian parliament was dissolved in 2020. In February of 2021, Moïse had also forced three Supreme Court justices to retire. The Haitian judiciary halted all courts and tribunals in protest.

The Organization of American States, the United States, and United Nations supported Moïse keeping his office under the claim his term did not end until 2022. The controversy over Moïse’s presidential term stemmed from a disagreement with his political opposition over when exactly his presidency had begun.

The panelists discussed assertions from Western media that made violence seem endemic to Haiti.

Garry Pierre-Pierre, a founder of the Haitian Times who has been covering the aftermath of the assassination, said Haitians were increasingly pushed to violent means by government inaction to address wealth inequality and corruption.

“The rioting that you see in Haiti, that is political violence. That’s politically motivated. People don’t go out and decide they’re going to loot– no, this is organized, because the Haitian people are not violent, like no more than any other people. They are forced into this condition,” said Pierre-Pierre. “When you look at videos of these gangs talking…they make a very compelling argument: ‘We don’t want to be in a gang, but we don’t have any school, we don’t have any healthcare, we don’t have anything, we’re suffering, can somebody please help?’ No one has helped them.”

Pierre-Pierre blamed the political and upper classes for “[absconding] their responsibility to the nation.”

Pierre-Pierre and Chèry discussed their concern over education in the country, as they both stated that Haiti’s schools had not completed a full academic year since 1981 due to political turmoil.

Dr. Nadève Ménard, a professor of literature at the State University of Haiti and visiting scholar of Haitian Studies at LACC, said foreign involvement in Haitian affairs and its implications needs to be addressed, especially when Haiti does not have functioning domestic institutions.