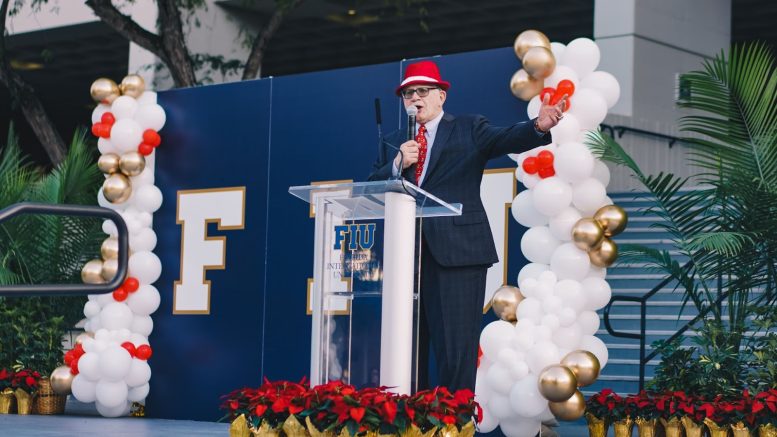 Mark B. Rosenberg giving a speech. | Via FIU Flickr

One of the measures for Mark B. Rosenberg’s return to FIU was to undergo sexual harassment training. Yet, as a former university president and professor for many decades, I find it hard to believe that this training will be effective.

Earlier this year, Rosenberg resigned from his position as president citing his wife’s health issues. According to a previous PantherNOW article, his resignation came about in the middle of an ongoing misconduct investigation against him due to sexual harassment claims.

The purpose of sexual harassment training is to inform employees about what it is,how to avoid these inappropriate behaviors in the workplace and what to do if you see it happening.

Acknowledging that Rosenberg has been at FIU for over 40 years, it’s clear that the information in this training is nothing new to him.

Following an investigation conducted by the law firm Isicoff Ragatz, it was concluded that Rosenberg’s actions didn’t necessarily fall under sexual harassment, but were still unprofessional; It acknowledged that both individuals crossed boundaries with one another.

After the investigation was reviewed by the Faculty Advisory Board, Rosenberg was allowed to return to FIU starting this upcoming spring semester as a tenured professor— someone who holds a secure position at the university, for the School of International and Public Affairs.

Rosenberg met with the Title IX coordinator — the person who handles civil rights laws that protect employees from discrimination based on sex — to discuss university policies on sexual harassment as well as to undergo sexual harassment training as measures for his return.

All of which makes no sense.

Because instead, they should have focused on his unacceptable actions as an employee and abuse of power.

Considering Rosenberg’s age and position in power, his actions fit right into the definition of a sugar daddy —an older man that gives a younger woman benefits in exchange for companionship — The companionship he claimed he’d been looking for because of his wife’s declining health.

His behavior towards the employee demonstrates disrespect towards the FIU community as its president. As a leader he shouldn’t have been using his workplace as a dating pool for his desired “companionship”.

His actions also show his tremendous disrespect to his wife and reveals his character as an individual.

I understand that there may be difficulties in his life. Yet, as an individual, it’s important to hold yourself accountable and think about when your actions are going too far.

He isn’t the first person in power to do this. Unfortunately, I don’t think he’ll be the last.

Various studies have examined why people in power tend to behave inappropriately through sexual misconduct.

For example, reports from Forbes consider three psychological streams that contribute to this type of behavior: predisposing personality vulnerabilities, psychological factors and social and environmental influences.

Based on the information presented to the public, what primarily influenced his actions are psychological factors adhering to relationships in his home, work and social environment.

Being the president of one of the largest universities in the country immersed him in an environment where he was surrounded by admiration.

Rosenberg said his behavior in this situation wasn’t a pattern or a routine for him. It’s safe to assume his power negatively influenced his behavior.

Although his actions weren’t considered sexual harassment, he still disrespected the university with his actions. Instead of receiving consequences for what he did, FIU condoned his actions.

FIU is financially compensating him with a salary of $377,000, which is twice more than the salary of other professors in SIPA. He also is being given a research stipend of $30,000 annually.

Completing sexual harassment training and meeting with the Title IX coordinator for his return is just useless. He is still vulnerable as his wife is still experiencing these health conditions.

Of course, being a professor is different from being a university president. Yet FIU is giving him a considerable salary and putting him in another position of power.

There also seems to be no consideration for students who don’t have a choice but to take his class and how that may be uncomfortable for them.

Football head to Norfolk to take on the Monarchs

Roger Federer and his battle with Father Time