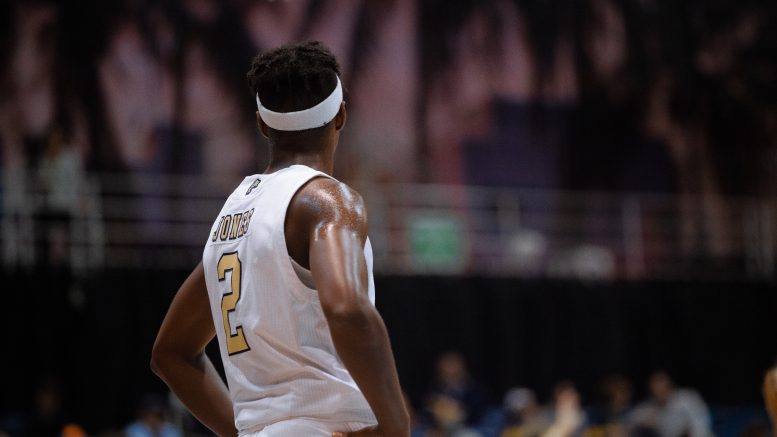 On Wednesday, the FIU men’s basketball team punished a lifeless Stony Brook team that was already down on its luck, 83-50.

Coming off two consecutive losses, the Panthers desperately needed a confidence booster. And with sitcom-like comedic timing, rolls in the Seawolves, a team that has lost all of their games this season by double digits. If the Panthers had one thing to be thankful for, it’s the fact that they played this team when they did.

Right off the opening tip, it was clear that FIU was the faster, more aggressive team. The game opened with a 10-0 run by the Panthers and their stifling defense didn’t allow Stony Brook to score for the first eight minutes.

The Seawolves shooting percentages for the first half are on par with the grade engineering students get on their first exam. The team shot a feeble 25.0% from the field and 26.7% from three. Only difference here is that engineering students can actually switch majors. Stony Brook wishes it could.

Heading into the break, the Panthers were up by a sizable 17 points and looking forward to Thanksgiving the very next day. Sophomore guard Denver Jones was ahead of the curve and already cooking, dropping 14 points off a blistering 62.5% from the field in the first half.

The second half was better than the first for Stony Brook, but that’s not saying much.

Overall, they did shoot a higher field goal percentage (36.4%) and were better from deep than before (33.3%), but they were missing a ton of free throws, only converting nine of their 15 trips to the line.

FIU didn’t hesitate to put the Seawolves out of their mercy. They kept scoring in bunches, hitting the final nail in the coffin for Stony Brook, 83-50.

Junior forward Keenan Sarven was the only positive the Seawolves had. He ended the night with an efficient 15 points and five boards. He was the only member of the team to have any success from deep, making three of his triples.

Weirdly enough, FIU didn’t shoot all that well in the first half of this game. They missed a lot of 3-pointers right out of the gate (26.1 3PT%) before eventually settling into more of a rhythm in the second half (53.3 3PT%). Their 14 3-pointers are the most the Panthers have hit this season.

But the Panthers have shown incredible improvement in one vital area: their free throw shooting. They made all seven of their shots from the foul line.

The disparity between fastbreak points and steals is also astounding. The Panthers had 20 points off the fastbreak, whereas the Seawolves had zero. FIU dominated in transition and that was a big part of why they won this game with such ease.

FIU had 13 steals to Stony Brooks’ three. The Panthers forced freshman guard Toby Onyekonwu to turn the ball over seven times; three times in the first half and four times in the second.

Jones has again shown why he is the team’s best offensive weapon. His 26 points are a career-high and his 20.4 PPG lands him as the second-highest scorer in Conference USA.

Graduate forward Nick Guadarrama also had a game that deserves more attention. Guadarrama finished as the team’s leading rebounder with nine boards and tied for first among the team in assists with five.

His defense and playmaking at the forward position are superb. He had the team’s second-highest +/- (24) and had a profound impact on every minute he was on the court.

FIU has the chance to fill up on some delicious Thanksgiving food before clashing with another struggling team, the Eastern Washington Eagles, on Sunday, Nov. 27.

Be the first to comment on "Panthers grasp much-needed win, decimate Stony Brook 83-50"