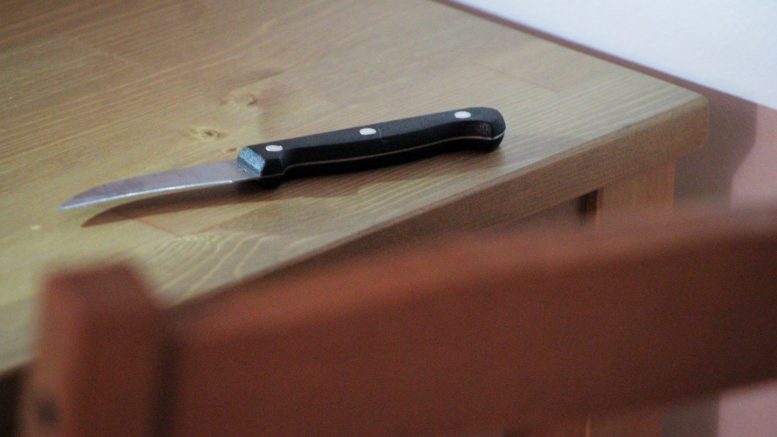 Kitchen knife lays on the edge of a wooden table. Jesse Fraga / PantherNOW

An assault with a knife at Bayview Hall on Oct. 9 led to a student arrest, according to reports from the FIU Police Department.

At about 5:45 p.m., officers arrived at the housing building on FIU’s Biscayne Bay Campus. The incident began when two roommates got into a verbal altercation, according to a resident assistant.

The fight led to one of the residents allegedly pulling a knife on, and threatening to kill his roommate.

A friend of the offender – with no FIU affiliation – witnessed the scene go down. The friend told FIUPD the two roommates were arguing and using racial insults against each other.

While the argument included insults based on ethnicity and race, the act itself was not a hate crime because it was caused by an outside dispute, FIU Police Chief Alexander Casas explained.

“The victim and subject traded insults, but the crime was not hate-based,” said Casas. “It became violent as a result of the dispute.”

The victim claimed that only the offender had been using verbal attacks, grabbed a knife during the fight and threatened to kill his roommate.

The offender’s friend claimed the offender already had a knife that he was using to cut food prior to the dispute. The friend claimed he only turned toward his roommate with the knife in hand after they began acting aggressively.

The friend also said the offender never made verbal threats or advanced on his roommate with the knife. Instead, the friend allegedly took the knife from the offender, put it in the sink and walked to the bedroom.

No parties were injured, but it was close.

“It was spur of the moment,” said Casas.

According to FIUPD files, another Bayview resident said the victim had been consistently aggressive towards the offender in the days prior. The victim made previous verbal and physical threats towards him and his family, and insulting his religion and culture.

The offender was arrested for aggravated assault, as well as having another warrant out for a previous offense.

Visit FIU’s Counseling and Psychological Services or the Victim Empowerment Program for resources and support.