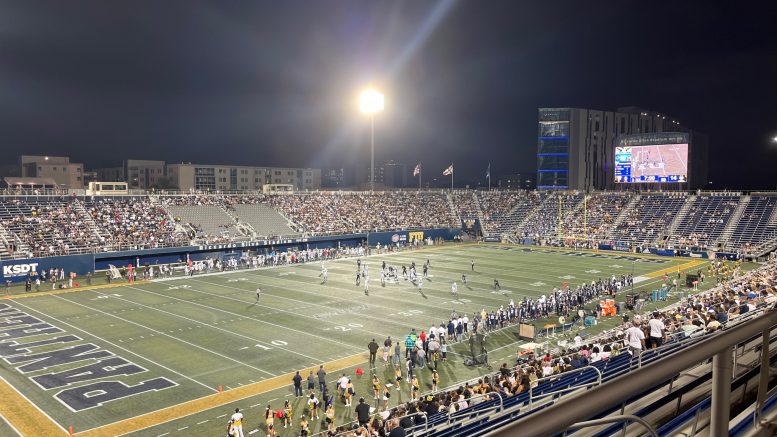 In a sea of white shirts, FIU football was outrushed by the snowy white jerseys of the Connecticut Huskies, dropping their homecoming game 33-12.

The loss drops FIU to 2-3 on the season and moves their overall record in Homecoming games to 9-12.

Following up their first FBS win and road victory of the season in New Mexico, the narrative for the Panthers coming into this game was clear: they had a chance to grab a winning record in the first five games of a season for the first time since 2018 when they started 3-2.

The story of the night, however, was the UConn run game. Putting up nearly 300 yards of rushing, the Huskies were running all over an FIU defense that was unable to keep the dogs on their leash.

Huskie running back Victor Rosa powered in two touchdowns and ran for 92 yards. The one-two punch he provided with fellow running back Devontae Henderson sparked the Husky offense. Rosa and Henderson combined for 227 of the 295 Connecticut rushing yards.

“We didn’t tackle as well as I would like us to,” FIU head coach Mike MacIntyre said. “On some of those [runs] they kind of ran through the first guy, and then he took off running.”

“We need to tackle better in some of those areas and we’ll keep working on that,” MacIntyre added.

The tone of the game for the Panther offense was set on the opening two drives of the game.

On their first trip into UConn territory, an errant snap on third and 8 bounced off quarterback Grayson James and rolled into the hands of the Huskies. On the following drive, James scrambled out of the pocket on 4th and 6 and made a throw on the run that ended up in the hands of a UConn defensive back.

“Obviously you don’t want to throw a pick, but I mean, really just was trying to make a play right there,” James said.

Unable to find a way to score in the first half, the Panthers entered the break down 20.

The defense held the Huskies on the opening drive of the second half, setting up the offense for their first score of the game. On a 4th and 2 James handed the ball off to running back Lexington “Flex” Joseph, and he took it for 47 yards into the endzone, putting FIU on the board.

Following a Husky trick play touchdown, the Panthers knocked in a field goal in the 3rd quarter, cutting the score down to 26-10. Following a chess match between the two teams for around ten scoreless minutes, the Huskies snapped the ball over the head of their quarterback and out of the endzone for a safety. With six minutes left in the game, the score read 26-12.

With a potential comeback opportunity, the stout Husky defense stuffed the Panthers. With just under three minutes left, UConn ran the game out of reach for FIU as QB Cale Millen scampered for a 49-yard touchdown to ice the game for the Huskies.

“Definitely a disappointing loss for us, I got to coach our guys better,” MacIntyre said postgame. “We had an opportunity there at the end with nine minutes to go and didn’t get it done.”

FIU faces a quick turnaround as they host the defending conference USA champion UTSA Roadrunners on Friday, Oct. 14, at 8 p.m. The battle with the Roadrunners will pit the Panthers against a strong and physical team.

“They’re a really good football team,” MacIntyre said. “So, we’ll have our work cut out for us and all of our guys will be excited. You always want to play against one of the best and it’ll be fun having them here Friday night.”

One of the biggest squads in the conference, UTSA will be the toughest test of the season for this young Panthers team.

“Those are the big guys in our conference, I don’t feel like we needed any extra motivation,” James said. “We know what they bring to the table, and we also know that we got to prepare and work our butts off all week, and I’m looking forward to the challenge as a competitor.”

EDITOR’S NOTE: Homecoming is around the corner