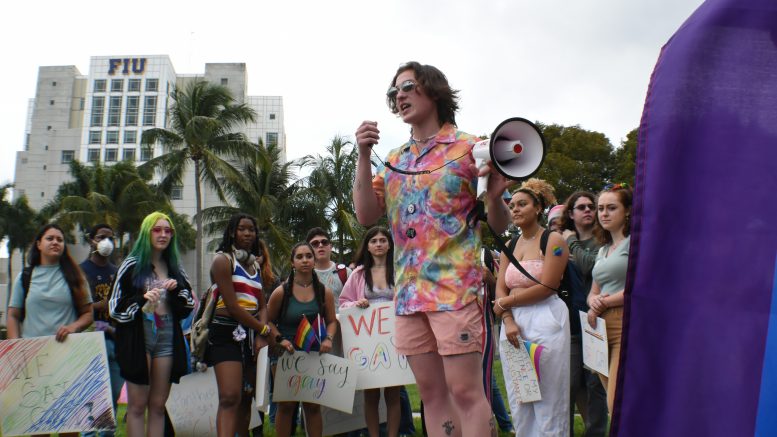 The Parental Rights Education Bill, better known as the ‘Don’t Say Gay’ bill, is a conservative talking point that could cause issues for schools and students.

The bill has some good goals and intentions. It states that parents have a right to view their child’s health and school records, but the bill’s language is far too vague and can be used to enable discrimination. The issue with this bill is found in article three of section one.

“Classroom instruction by school personnel or third parties on sexual orientation or gender identity may not occur in kindergarten through grade 3 or in a manner that is not age-appropriate…” states the bill.

The bill also gives parents the right to sue the school if the procedures are violated but isn’t specific enough to accomplish any certain goal. By allowing parents to sue a school for teaching their kids about the gay community and gender identity, the state is infringing on teachers’ and families’ rights and robs students of a typically safe space.

Children can have two moms or two dads, but this bill leaves them vulnerable to bullying and isolation.

Teaching students about sexual orientation or identity could make a huge difference in destigmatizing the LGBTQ+ community. Even if the bill clearly explained what is “age-appropriate,” its vagueness leaves teachers and students vulnerable.

Treating children like they’re abnormal will only continue the devastating trend of suicides afflicting gay youth who are four times more likely to commit suicide than cisgender and straight kids the same age.

At its core, this bill is taking a dangerous “culture war” narrative that’s occurring nationally and applying it to Florida, possibly in pursuit of political capital amid governor Ron DeSantis’ likely run for president in 2024.

As a governor whose administration is centered around the typically conservative notion of small government, why is he going out of his way to tell schools what they can and cannot teach to students? This bill will not make the LGBTQ+ community disappear, but it will give him a boost with conservatives in his 2022 reelection bid and if he plans to run for president two years later.

If the goal of this bill is to make discussions about these tough topics age-appropriate, then it could do much better. There are books and other resources that can help teachers and parents teach their children about the LGBTQ+ community without ignoring it or banning it from the classroom.

We need classrooms to be safe places for children to learn and grow. That can’t be done if the state limits teachers with harsh bills dictating what they can teach.

The opinions presented on this page do not represent the views of the PantherNOW Editorial Board. These views are separate from editorials and reflect individual perspectives of contributing writers and/or members of the University community.

Greenhouse Play Program Makes Summer Debut with “While We Wait”

“Jurassic World” is a “mixed bag like its predecessor”